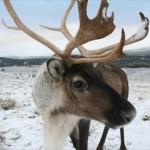 Santa is coming to town!
This week, the Prime Stables Team have informed me that they put up a 10.8m Mobile Field Shelter for reindeer! The three reindeer that will be using the shelter are called Dancer (because the previous owner has a dance class), Velvet (fur like velvet) and Spot (because his fur is white with one brown spot). Ms Sally Begg is the owner of the reindeer (and of two fallow deer) and originally got them to set up a Santa’s Grotto in her field however, with the hustle and bustle of Christmas, time went to quickly so they are now going to be used at her local outdoor ice rink over the festive period for children to see and stroke.

A little bit of information on reindeer.
Reindeer are classified as a ruminant mammal. Ruminant mammals are even-toed, cud-chewing, hoofed, usually horned mammals which have 4 compartments (sometimes 3) of their stomach. The hooves are large and sharp enabling them to travel long distances which consist of snow and ice with large dewclaws which sink into the snow to aid traction. This also helps them to dig for food.
Reindeer have thick winter coats of hollow hairs which provides good insulation and mean they are good swimmers as they have natural buoyancy.  They also have hair covering their nose to prevent them from getting frostbite.

In reindeer, there is a tendon which rubs over the bone in the ankle which makes a clicking noise when walking to help each other keep track of one another in blizzards. (This clicking develops at approximately 12 months)
What makes reindeer different?

Reindeer are the only mammals that can see ultraviolet light and the only deer where both sexes grow antlers.

Reindeer antlers are deciduous.  The antlers of the older males come off in December, young males in early Spring and females in the summer time. Don’t worry though as they grow back again every year under a layer of fur called velvet.

Antlers grow from permanent bones on the reindeer’s skull called pedicles. When growing, antlers are a soft, rubbery, living mass of blood and marrow covered with velvet skin. Nerves grow at the same rate as the antler, which can feel quite warm during the growing process due to the blood circulating so close to the surface. Reindeer are very sensitive about anything touching their antlers whilst they are in velvet. Antlers grow from the tip unlike horns which grow from the base.

At the end of August, blood stops flowing through the antler and the bone begins to harden. The reindeer will then begin vigourously rubbing the velvet off, with rutting bulls it can take only 24 hours before the velvet is totally stripped. Reindeer cows keep their antlers longer than bulls in order for them to become dominant over the winter period, thus ensuring that they and their calves get the best food through the winter.
So this Christmas, don’t forget to leave out that extra carrot for the reindeer with your mince pie for Santa Claus on Christmas Eve so they keep their strength up to deliver all the presents to the good boys and girls around the world!

The Stable Doctor
https://primestables.co.uk/news
Advice is given without legal responsibility
Researched: Freespace, Facts About