How Do I Know If My Horse Is Going Blind? 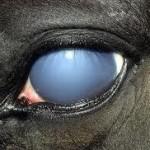 Why the moon is no longer bright for some horses.
The most common cause of equine blindness is Equine Recurrent Uveitus (ERU). Uveitus translates as inflammation inside the eye which is common in may eye ailments and most cases recover however, the difference with ERU is that there a re repeated attacks and this often happens when a horse is either reaching or at the peak of it’s career.
Signs of ERU:

EXAMPLE
Richard Barrett, who was a grand prix dressage rider and his star horse Alcatraz. Alcatraz had cataracts in his right eye. One day in spring in 2008,  his left eye swelled up and closed, he was rubbing his eye against one leg and shaking head around He wasn’t acting himself , said Barrett.

The vet suspected uveitis and when Alcatraz had another attack some time later, suspicions were confirmed. Barrett wasn’t aware that uveitis affected Alcatraz in training as he was living with cataracts beforehand. It was a case of managing the problem to stop recurrence.

Alcatraz wore a special UV filter mask when in sunshine for long periods of time and was given eye drops daily. The vet suggested lenses may help but at 19, they thought it wasn’t fair to put Alcatraz through any more treatment unnecessarily.
Alcatraz was put down due to uveitis and Cushing’s last July.

How Do I Treat My Horse?
Overall, the prognosis is fair to poor for keeping the eye visual and controlling the uveitis, especially in Appaloosas. Treatment is usually lifetime and can take much time and money, but it prolongs comfort and vision in most cases. It is important to understand that if the eye is blind and painful, it should be removed by your vet. Some offer surgical treatment of ERU if the eye is still visual, in which a portion of the vitreous humor (the gel-like substance in the back chamber of the eye) is surgically removed. This is called core vitrectomy.

Medical treatment is by far most commonly prescribed, and can include topical corticosteroid ointment or drops, subconjunctival steroid injections, topical and/or systemic nonsteroidal anti-inflammatory medications, topical dilating drops, and/or systemic antibiotics if an active leptospirosis infection is suspected (but this treatment is controversial). It is important to realize that medical treatment is usually lifetime, even if the uveitis is controlled. If medication is discontinued or decreased without input from your veterinarian, the horse will likely have a repeat attack, and the attack will probably be a severe one. Each attack of uveitis is cumulative; that is, the damage from each attack adds on to the damage from all previous attacks, and brings the eye that much closer to blindness and potential removal.
Consistent treatment is important!
So, keep an ‘eye’ out for your horse!