Osteochindrosis. What is it and what treatment is available. 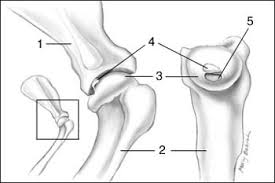 This week I thought I would compile a report on this not too well known disease.  I would welcome knowing of your experiences of OCD so as to share them  other readers. It may just help someone who’s horse may be suffering.

Osteochondrosis or (OCD)  is a relatively common developmental disease that can affects all types of horses, but particularly larger faster growing breeds. Osteochondritis dissecans is the most common clinical manifestation of this. Although the exact causes of OCD is not definitively known at this time.

OCD is thought to occur as a result of a failure of endochondral ossification leading to a disturbance in the formation of joint cartilage and the bone supporting it. The cartilage and subchondral bone is irregular in thickness and weaker than in normally developing areas.

When the horse moves, forces placed on these abnormal areas may cause further damage to the abnormal tissue. This can lead to local detachment and fracture of cartilage and bone forming an OCD fragment. These detached areas may remain partially attached to the surrounding tissue, existing as loose flaps of tissue, or occasionally may become completely detached, resulting in free-floating islands that can travel throughout the joint.

These OCD flaps and islands of abnormal cartilage and bone cause inflammation in the joint thereby resulting in pain and lameness.

Causes And Risk Factors For OCD

Several causes of OCD are known;

Rapid growth and large body size: An unusually rapid phase of growth and/or growth to a large size can be associated with OCD formation.

Nutrition: Diets that are very high in energy or have an imbalance in trace minerals can lead to OCD formation as can general under-nutrition

Genetics: Risk of OCD may also be partially inherited, although the mode of inheritance is not fully understood.

Hormonal imbalances: Imbalance in certain hormones during development, including insulin and thyroid hormones.

Trauma and exercise: Trauma to a joint, including routine exercise, is often involved in formation and loosening of the OCD flap or fragment.

Since all these factors may be involved in a complex series of interactions it is not possible to predict which horses will develop OCD, and it is therefore difficult to prevent the formation of OCD in individual animals. 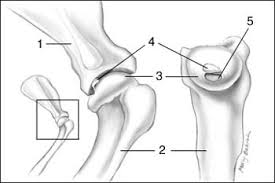 OCD can be detected as early as 4-5 months of age or as late as skeletal maturity approximately 3 years of age. In adult horses signs may reappear at any stage of life when the OCD fragment may move within the joint. The most common sign of OCD is effusion within the affected joint often first noticed shortly after the horse begins formal training and exercise.

Depending on the location and severity of the OCD, the horse may be noticeably lame, may only be lame during high speed work, or may not have detectable lameness at all but usually shows a reduction in performance. The typical manifestation of OCD in the hock is the formation of a bog spavin.

The optimum treatment for OCD is dependant on the fragment size. Small fragments can often be treated by rest and anti-inflammatory therapy and may not require surgical removal. Medium to large OCD fragmentation are best treated by surgery.

Until recently the surgery of choice was removal of the abnormal bone and cartilage fragment via arthroscopy.

Following proper treatment the prognosis for athletic function is good to excellent for many types of OCD, however some locations, particularly the shoulder, have a poor prognosis for soundness.

The ‘down side’ of arthroscopic OCD removal surgery is that removal of the fragment results in a permanent irregularity to the subchondral bone plate which is then covered with poor quality modified cartilage.

A new form of treatment was developed at Cornell University that involves pinning the OCD fragment back onto the parent healthy bone These pins become incorporated into the new bone as the OCD fragment becomes reattached to the parent bone, with the end result being a smooth bone contour. This surgery is particularly useful for stifle OCD.

Having undertaken the procedure it has been found that whilst the technique is tricky it does result in a smoother bone contour. I suspect that over time the procedure may be expanded and other materials may be used. This surgery is currently not suitable for all horses and can only be undertaken in younger animal with larger OCD fragments.