A Complete History of Horse Stables Through The Ages 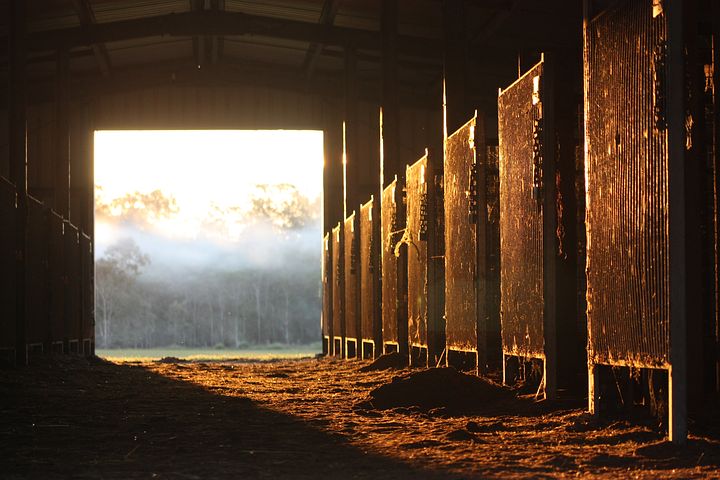 Who Built The First Horse Stable?

The answer could just as easily be: who domesticated, or tamed the first horse?

The truth is that nobody can answer exactly, because ancient people were nomads and lived transient lives. Take the Mongolians, for example: horses have always been essential in their lives. There’s a phrase in Mongolia that states: “A Mongol without a horse is like a bird without wings.”, and this sums up how entrenched horses are with the Mongolian lifestyle. But even with the deep fascination with horses in Mongolia, it is very unlikely you’ll find fences or stables, especially in their distant past.

We need to go to Egypt to find the first trace of a horse stable. The world’s oldest stables were discovered in 1999 in the ancient city of Qantir-Piramesse in Egypt. It seems that they were established by Ramses II (1304-1237 BC) to breed horses for war, hunting and recreation. These stables are the largest ever found, covering approximately 182,986 square feet and housing 480 horses at a time. They consisted of six rows of halls with sloping floors, divided into stalls for the horses, and a vast courtyard that was probably used as an exercise or practice yard.

Other traces of ancient stables were found in Mamshit (Mampsis), a Nabatean1, Roman and Byzantine city, located southeast of Dimona, in the Negev desert, Israel. Arabian horse breeding was one of the biggest sources of income for the Nabatean society, and archaeologists discovered well preserved ruins of a stable. Dated to 100AD and in use until the 7th century, the stable could host up to 16 horses, arranged into two wings.

Also, in Roman times horse stables were a large part of the Roman Empire, and recently in 2014 the stables of the great Emperor Augustus were discovered during a car park excavation in Rome. The remains of the horse stable are reported to be made from marble, and ancient graffiti boasts of victories in races at the Circus Maximus. Unfortunately, due to lack of funding the discovery is going to be reburied with waterproof cloth for a future generation to discover.

For more recent evidence of horse stables, we have move forward to the medieval times.

Horse Stables in the Middle Ages

Horses have always been expensive animals, but in the past they were working animals, used for transport, communication, and battle as well as a statement of status. Every farm had its own horse and it was considered as a valuable commodity. This is why stables were complementary to the house, or built as close as possible to it. Furthermore, their quality had to be better than other farm buildings, as keeping their horse in prime condition was vital to the economy of the household.

During the Middle Ages, in the period between the 5th and 15th centuries, castles had the primary function of being used for defense. Every architectural element was designed to ensure this function, without putting particular attention to their appearance. In the same way, medieval stables were merely functional and had no trace of aesthetic value. They often included hay-lofts and room for the grooms or stables hands to sleep. It is believed that medieval stables were rare because horses were probably left outside during summer and hosted in stables only in the winter.
In 2013 a team of archaeologists from Czechoslovakia, Australia and the United States, explored the remains of a medieval stable located near a castle in the South-East of the Czech Republic. This discovery represented a unique opportunity to study the architecture of the stable, its maintenance and horse care. It is a precious testament how a real medieval horse stable worked and functioned.

The archaeologists found three main purposes for the stable. It was used as a temporary accommodation of courier horses, horses bred for battle or simply horses belonging to the people who worked in the castle.

According to the experts, it seems that the stable was constructed in two phases. It is also thought that it was larger than the actual size of 14 metres by 2.5 metres, with the entrance being 1.6 metres wide. The roof was supported by crossbeams made of timber, every two metres along the walls, and the thickness of its infill was 80 centimetres. The stables might have been totally rebuilt during the second phase of the construction, with the exception of its foundations. This new building was divided by two walls which created three rooms and could host up to seven horses. The researchers believe that two of the new rooms served for the accommodation of pregnant mares or superior horses and their preparation. The rooms both had wooden floors.

The Golden Age of Horse Stables

Free-standing stables started being built from the 16th century onward, and from the 17th century they were designed to complement the architecture of the houses. Elements such as clock towers, entrance arches, large yards and different materials (like stucco, wood, bricks and stone) became indispensable features. The stables were designed to take account of local building materials, popular architectural styles and, of course, the weather.

It became quite popular to build stables which looked like houses, with symmetrical windows and large doors, as well as the idea of giving horses their own space. What we call ‘stall’ started being planned specifically to cater for sick horses or foaling mares.

During the Georgian era (1714–1830) stables were built with stones or bricks, often within a courtyard. To provide access to the horse accommodation and other rooms, there was a passage from the stable yard, but sometimes harness rooms were located in other buildings. The fodder was stored in a hayloft above the stables and living quarters were often created for the grooms or other stable staff. The horses were accommodated in stalls and tied with a rope, with a stone or wooden weight on its end.

As for loose boxes, they were not so popular due to the large space needed for them. In case of necessity, boxes were used to keep stallions or foaling mares. Within the courtyard there were feed rooms, storerooms and a coach-house. Surviving seventeenth century stables can also be seen at Dunster Castle, Somerset.

The Victorians (1837–1901) improved the lives of their horses by giving them extra comfort and hygiene, and by building more solid and robust stables, with draught free ventilation and damp free floors through drainage channels. They drew up rules on how horse stables should be built to specific specifications.

You can see some of the specifications required by Victorian stable builders, here.

From the second half of the 19th century stables were built not only for housing horses, but also for showcasing the owners’ power, wealth and pride. Horses offered transportation and they often were the most valuable asset of an estate. Stables were a true luxury and a huge amount of money was spent to buy the finest horses, bred to ride and pull carriages. Livery men were often among the best paid domestic staff, and the richest people traveled the world in search of the most beautiful breed of horses. Famous architects were asked to design not only functional, but beautiful structures with rooms for offices, bridles, saddles, blankets and carriages.

Soon, progress was galloping faster than horses and by the 1860s people began riding bicycles, flying airships and reading about steamships in the newspaper. Technology was moving at an ever increasing pace and towards the end of the Victorian period, motor cars were being developed. Horseless carriages, like cars, vans and motor cycles were to spell the end of our reliance on horses once and for all, and though accessible only to the wealthiest in the beginning, these new inventions were soon to be used by everyone.

After the WWI, many stable buildings fell into disrepair. They were no longer a necessity, and were expensive to the point of being a pure luxury. Also because maintenance costs were so high it was actually cheaper to buy one of the newfangled machines that run on combustion engines.

People gave up horses and converted old stables into domestic homes, offices, restaurants, museums, workshops, offices, pubs and shops. One of the most famous examples is part of Camden Market, in London. It is the Stable Market and was a large stable building, built in 1854 to look after horses. The entire area was a hive of activity in the last part of the 19th century, because goods were loaded on and off canal boats and distributed by horse and cart across London.

After being heavily bombarded during the WWII, the stables were then restored and today make up one of the most famous attractions in London.

Nowadays horses owners have different needs compared with the past: they still want quality cozy, dry and warm places for their four legged friends, but ideally without spending a fortune. Also, stables aren’t a complement to the house anymore, and it seems we’re almost returning to the origins or horse stables. This is why wooden mobile stables and mobile field shelters are now so popular and at Prime Stables Ltd we provide for customised solutions through high quality handcrafted stalls and internal stabling, for horses and other animals.

And if you want a complete history of Prime Stables? You’ll have to visit here: https://web.archive.org/web/*/http://www.primestables.co.uk/