The World’s Most Famous Horse Stables 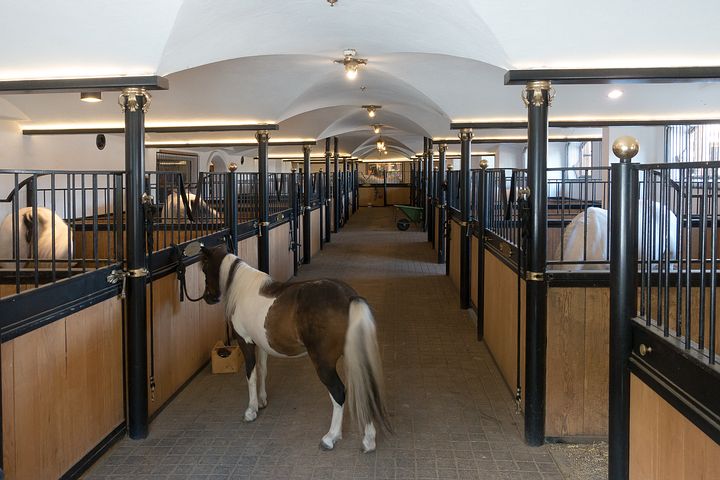 Here at Prime Stables we love horse stables, believe it or not. There are such a variety of stable designs out there that serve multiple functions, some are practical while others also have added glamour. So, we have decided to share with you the world’s most famous horse stables. We hope you enjoy reading about them!

His Highness Sheikh Mohammed founded Godolphin as an expression of his lifelong passion for horses and racing. This passion for horses grew into a major investment in bloodstock and has resulted in the growth of the world’s largest and most global racing team. Godolphin stables are located in the desert, south of the city of Dubai. This area has a rich history as a centre of equine excellence, with stable facilities that include several American barns, a nine-furlong private dirt track and two trotting rings, alongside two equine spas and a treadmill.

Dubai is a city that is one of the leading tourism and commercial destinations in the world. As the city has grown, the passion for horses has grown with it. Every year, Dubai hosts the most valuable event on the international horse racing calendar, the Dubai World Cup, attracting horses from all over the world to compete for the world’s richest race.

People come from all over the world, Hungary, France, Belgium, Russia and even Australia to purchase the Sledmere horses. The stables have been in constant use since 1780 when they were first built and they have been part of the famous racing tradition at Sledmere. It was in these stables that the Sykes family bred some of the most famous racehorses in the world, including Spearmint, Straitlace, Scottish Union, Grey Momus and Polly Agnes.

The whole ground floor of the stables is open for visitors to explore. The stables remain working stables to this day and have some of the horse breeds that would have been used on the Sledmere estate in the past, including a thoroughbred racehorse, driving cob and a small family pony. These magnificent stables are worth a visit.

Blue Hors is one of the most famous stables in Denmark and one of Europe’s leading EU stallion stations with everything under one roof. The Blue Hors riders participate in national as well as international competitions. The stables are of the finest quality and built with stunning attention to detail. Blue Hors riders have won numerous Danish Dressage Championships and competed at the Europeans Championships, World Equestrian Games and Olympic Games. Not only do they keep busy with all of that but they provide a care and grooming line of high quality products for all types of horses that are sold in over 250 stores in Denmark and in other European countries.

Zayat Stables is owned by the Zayat family who have recently become one of the most successful families in horse racing. Ahmed Zayat first entered thoroughbred racing in 2005 and, in one decade, amassed some of the most prominent successes in the industry. Ahmed Zayat has been a horse enthusiast for as long as he can remember and within just 12 months of forming Zayat Stables, he raced two Grade 1 winners and has continued to add to that haul every season.

Zayat Stables have the honour of Bob Baffert training their horses. Baffert is one of the most successful trainers in the history of racing. He has trained many of the horses at Zayat Stables who have then gone on to win major racing competitions.

Park House Stables at Kinsclere is undoubtedly one of the best equipped and most beautifully private training establishments in the world. The facilities are constantly updated and extremely well-maintained since the yard was originally built in the late 1860s. Being a private stable, it can be used in whatever way and at whatever time best suits the effective training and care of the horses.

Kinsclere was one of the first training establishments in the country to be equipped with its own equine swimming pool. This has made it possible to include swimming as an integral part of the training regime for many horses, particularly those that may be mentally or physically fragile. Kinsclere cares wonderfully for its horses and the fully equipped, functional stables allow them to do that well.

Calumet was acquired in 2012 by reclusive billionaire Brad M Kelley, who dropped out of college but proved so business savvy that he now ranks as one of the largest landowners in the United States. Calumet has rapidly collected several horses. Included in the ranks are approximately 300 broodmares, 200 horses in training and roughly hundreds more counting stallions, weanlings and yearlings.

The Calumet Estate and Stables are beautifully picturesque. The red window frames against the white of the building make for a staggering contrast which adds character and visibility to these stables. Expanses of white-fenced fields lay all around the main building, with more than enough space for the army of horses to exercise. This place was purposely built to serve horses and it certainly does cater to their needs.

Have you seen or visited any of the stables mentioned above? Let us know in the comments below, we would love to hear from you!