Ragwort – Its Dangers And Dealing With Them 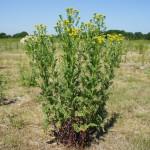 The Ragwort plant is a common weed that grows throughout the land and potential poisoning poses a real threat as it contains toxic compounds that could kill your horses if you aren’t aware.

Horses are particularly susceptible due to grazing as are other animals.

Ragwort – Its Life Span And What It Looks Like

In its first year of growth it has a spade shaped leaf and produces a dense rosette of leaves and is dark green in colour and stays low to the ground.

In its second year of growth it can get grow to be a metre in height, it will have woody stems and produce its deadly bright yellow flowers between May and October.

If is cut or mown it will come back flowering each year. Each plant will produce thousands of seeds and will be blown on the wind if not removed early. The bad news is that the seeds can also remain dormant for many years. Just when you think you have eliminated it, it can return without warning.

You will generally find Ragwort in poorly managed pastures. Closely grown grass prevents ragwort growth but when the grass becomes thin due to poaching or over grazing the seeds are free to germinate.

Will Horses Eat Ragwort?
If horses have an alternative good food source, they will generally avoid eating it. So on sparse fields it can be a danger. It does have a bitter taste but when it is cut or wilted it does become more palatable to animals.

What Are The Health Dangers To My Horse If Ragwort Is Eaten?
Ingestion of the toxins held within Ragwort can result in chronic liver failure. Liver failure occurs when the liver can no longer perform its function.

If a horse is only eating a little ragwort over a long period of time the damage can be slow and progressive. So be aware!

Development of Liver damage can also occur up to 6 months after ingestion, which means you have to be vigilant.

What Are The Signs Of Ragwort Poisoning?
There are few outward signs of ragwort poisoning other than perhaps a depressed behaviour which is thought to be brought about by the toxic chemicals in the plant altering the brains chemistry.

Another sign of Ragwort poisoning is an inflammation of white, un-pigmented areas of the skin when they have been exposed to the sunlight which is known as photosensitization. Once again this is because the liver is not functioning as effectively as it should. Do not confuse this symptom with sunburn however. This is a completely different ailment.

Look out for a jaundiced appearance, weight loss and diarrhoea too, as this may also be an early symptom.

How Is Ragwort Poisoning Diagnosed?
The only simple way to diagnose Ragwort poisoning is by way of a blood test. This will show if the liver is damaged or if there is a reduced liver function.
A liver biopsy is more involved and dangerous. According to the British Horse Society, it is hoped that a blood test will be available shortly that will identify early signs of ragwort poisoning before significant untreatable liver damage has occurred.

What Treatment Is There Available For Liver Damage Caused By Ragwort Poisoning?
There is limited treatment available once liver failure has occurred. When over 80 percent of the liver has failed, it is difficult for the liver to regenerate itself. Having said this, some horse can survive.
Click Here to View a Video of a Field Full of Ragwort Plants

Summary
I know this is a scary article, be vigilant. If you are, your horses will not be in danger. Educate your fellow horse riders. Ragwort contamination is growing and we all must be aware of its dangers.

The Stable Doctor
https://primestables.co.uk/news
Advice is given without legal responsibility
Research: The British Horse Society